Next month we have our yearly AGM and we are reaching out to those people who are not paid up members  but support our work and events.

Friends of Monifieth House of Memories we are calling them.

If you appreciate the service provided by the Monifieth Local History Society, which includes the management & financing of the House of Memories, on behalf of the community, then why not ‘sign up’ as a Friend who supports our work in preserving the Heritage of the Angus Local Area. There is no need to become a ‘paid up member, just recognition of your support by sending us an email.

We know that we have followers of the website all over the world but it would be nice to hear from those who check the website from time to time and support the work we are doing.

Thank you for your emails in advance.

If you live locally please pop into the House of Memories and sign the form.

We are depleted in numbers due to the illness, of Alex Bell, our Vice President, and Doris Bayne, our Treasurer.

Their invaluable work as Society volunteers, I feel should be recognised by nomination for Honorary Membership, with the wish to see them soon back in good health . Seems as though the summer is over and we are now planning for the Autumn months. We should feel some sense of achievement in the fact that after 17 years since the formation of the group, we are still very active and contributing a much welcomed service to the community at large.

Monifieth, unlike other Angus towns, being bereft of some services provided by the Angus Council Administration, is dependent on voluntary organisations to preserve and encourage the sense of community. Monifieth Local History Society’s objective in preserving the Heritage of the local area. The success of our work, can perhaps be gauged by the House of Memories, and Website, both being very active for over 13 year, and yet still creating much interest.

The financing of both has over the years been graphically ‘peaks & troughs’, and causing many sleepless hours for those associated with fundraising. However, we are still here and operational, thanks to the generosity of the local community, Angus Council Community Funding, and the initiative of our volunteer fundraisers. We still survive. The Future requires us to consider, even re-consider ideas old and new, to maintain and improve our objectives. We do have some feedback from those who attended our recent talk “Monifieth’s Disappearing Heritage”, for example; Friends of the House of Memories. Those who are prepared to sign up as interested in supporting our work, without the necessity of becoming ‘paid up ‘ members.

PLEASE LET US KNOW IF YOU WISH TO BECOME A FRIEND

One final suggestion, with the approach of the ‘cooler autumn days’, the ’55’ volunteers, bring out their woollens for warmth.( Energy prices are rising) Thank you all for your commitment and hard work.

The Monifieth Local History Society was formed in September 2000 under the patronage of Lord George Thomson, of Monifieth, by a number of people interested in researching, recording, and promoting the social and industrial past of the ancient community of Monifieth.

The main objective of the Societybeing to create an awareness of the many historic happenings, and events connected with the Burgh, locally, nationally and internationally.

Learned historians have recorded that in pre-historic times , the only collection of human dwellings, in what we now call Scotland, were at Laws, Ardestie and Ardownie sometime around 3000BC.

The development over 5000 years to the present day has resulted in a community spirit, which is caring, vibrant, and very much concerned with the future of how their home own will evolve.

The Society’s work will hopefully convey the innermost feelings of the people of Monifieth past and present.

The future is unpredictable, however, with the experience of a community surviving for 5000 years, we believe Monifieth’s residents will look forward with future generations considering it to be ” The Best Place to call Home ” 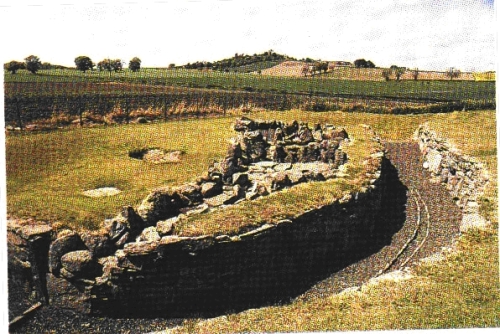 As sure as the sun, has arisen and set for thousands of years the Dighty flows into the Tay beside the place where many have been proud to call home.

To others it is known as Monifieth