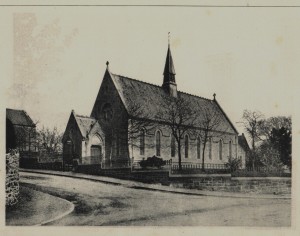 (In connection with Monifieth Parish Church)

During January last an organ was erected in the above hall, and the platform enlarged. The organ is a finely-toned instrument, and greatly enhances the internal appearance and beauty of the building.
Dr Young, on the first meeting of the congregation in the hall
– February 9th- after the erection of the organ, delivered a lecture on music, in connection with praise, since the earliest period of the Christian era, supporting his statement by reference to ancient books and sculptural monuments.
– He stated that the service of praise was one of the most pronounced customs of the early Culdees, who had a place of worship on the spot where the present hall now stands. Part of an obelisk erected by them still exists, and may be seen a little north of the Parish Church, and it is known as the `Font Stane`, the shaft having been carried away. It was partly destroyed by being taken and used as a lintel for the door of the `old church`– that is the predecessor of the present building—and in this manner it was mutilated to bring it to the required shape.
– It was subsequently built into the front wall of the present church, but has since been taken away. On it were sculptured Jesus on the cross, and at His feet David playing a harp. On the other side were the figures of three women surrounding a younger female playing a lyre. Dr Young afterwards spoke of the efforts put forth by the first General Assembly to introduce the service of trained singers into the Church, by giving a brief history of the Scottish Psalter, prepared by John Knox, only one copy of which was known to exist. He remarked on the fact that Gilbert Garden, the first minister of the Reformed Church in Monifieth, was Moderator of the General Assembly which put forth such zealous efforts for the proper musical training of the people. The history of our present version of the Psalms was also dealt with, and examples given of the variations to which they had been subjected before they finally attained there ultimate form