When driving along the Dundee to Arbroath road one cannot be but impressed by the amount of building activity going on between Claypots and Monifieth. A recently erected directional sign points the way to a housing complex which will be known as Panmurefield Village. Perhaps the workmen and prospective buyers are unaware of the local, indeed national, history connected with this area of land.

Assuming that the choice of name was taken from the former cottages occupied by the long since gone Panmurefield bleaching works, it makes one think of other alternatives that could have been chosen for a place so steeped in Scotland`s history.
Prior the establishment of a new road system it was possible to make your way down the hill making a right turn away from Panmurefield, past the old Balmossie mill to an old bridge over the Dichty burn.
It is recorded that Ecclesia montis Dichty was situated on a crag, above the river , almost opposite Balmossie Mill.
The chapel was built on the site where reputedly the relics of Scotland`s patron Saint Andrew were laid during discussions with the Picts.
It has not been clearly established as to whether or not Regulas, (Riagil Celtic) or as he later became known Saint Rule, patron saint of Monifieth, who was an Irish monk and follower of Saint Columba was involved .
We will call him Rule, the modern day adaptation he is known by. Rule was at one time head of the Christian settlement at Patras in Greece.
This Grecian city was the place where Jesus`s apostle Andrew was martyred. Over three hundred years following the death of Andrew, Emperor Constantius became desirous to acquire the revered relics of the Saint.
Rule had already recognised their significance and left for Scotland with the bone of a forearm, three fingers of the right hand, the pan of a knee and one tooth in his care.
How long the hazardous journey lasted is not known. It is said the journey lasted for two years with seventeen monks and two nuns in the accompanying party. Eventually Rule and his followers with the sacred relics arrived at the mouth of the river Tay. Story has it that the journey ended in shipwreck off Fifeness near Lady Buchan`s cave at Muckros ( the promontory of the pigs) later to be called Kilrymont.
The landing place was to become a very revered holy and sacred place known throughout the world as St Andrews.
The journeying of Rule did not end in Fife, for after several days rest, during which time a cross was erected to denote the importance of the place, he with some of his followers carrying the precious bones, set out to cross the river Tay.
In order to promote his cause he sought the assistance of the local ruler King Hungas of the Picts.
After crossing the river at Forteviot in Perthshire, Rule met the King`s three sons, who advised him that their father was on a mission of war against the Saxon, King Athelstane.
Queen Fichem, wife of Hungas was residing at her family home on Balmossie muir, then known as Moneclatau or Monichi , translated as Monks house or land.
After the Queen received Rule and the protectors of the relics a chapel was constructed, on crag above the Dichty water, and this was to be known as Eglismonichty.
Queen Fichem later gave birth to a daughter Mouren, who died and it was said she was the first to be interred in the consecrated ground at the Chapel of Kilrymont. In gratitude Queen Fichem gifted Moneclatau and the royal residence to God and St Andrew.
King Hungas accompanied the relics to Kilrymont and was present when the chapel was dedicated.
According to notable historians the story of St Rule is mythical, but both King Hungas and Queen Fichem were rulers of the Picts in the mid eighth century.
The bringing of the relics to Scotland has been attributed to the efforts of Bishop Acca, circa 732. This date would indicate the story related to the Bishop rather than St Rule, who came to Scotland with Columba in the fourth century when they formed the Celtic Church.
The Chapel of Eglismonichty survived many centuries until around 1760 when it was in a ruinous condition and it was decided to demolish it.
The cemetery was ploughed up and the bones removed for reburial. The circle of plane trees, gifted by the Laird of Balmachie, which indicated the site of the chapel, were later removed, with the exception of one on which the chapel bell was hung.
This became known as the Bell tree, or by some as the Lady tree.
Legends tell us that the bell was rung to summons the holy men from working in the fields, at times of devotions or meal breaks.
Balmossie mill was built with some of the recycled chapel stones. A door near the roadside has carved stone work more in keeping with the entrance to a church. 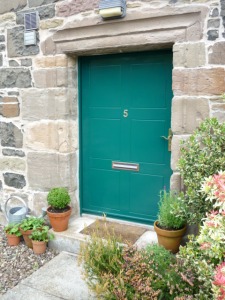 In the midst of a rapidly expanding housing estate it is questionable how long will it be possible to see what little remains of the chapel built on the spot that sheltered the bones of our patron , Saint Andrew.

One response to “Chapel of Eglismonichty”